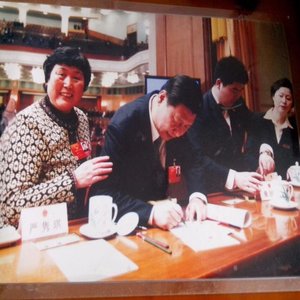 Xie Mulan, director of rural women's village in town of Yugan County, Jiangxi Province, has led the rural women to break into a special road to get rich. As the most basic farmers in the National People's Congress, she was elected as a meeting of the eleven National People's Congress Chairman of the delegation, for the first time to sit in the Great Hall of the people solemnly on the podium, the first time from the party and state leaders only a few steps away.

The afternoon of March 17th, at a meeting of the eleven National People's Congress for statistical votes clearance respite, Chinese youth daily picture director He Yanguang filmed a group of female representatives from Jiangxi province to ask President Hu Jintao signed photo. The woman sitting on the rostrum was called Xie Mulan. She was the head of the rural village in Jiangxi, Yugan province. In the Great Hall of the people appeared in this episode, people not only feel the grass-roots representatives of the country's leaders love and affection, but also reflects the party and state leaders of the people side. Why did Xie Mulan think of the chairman's signature? How did the signature come? How did He Yanguang capture this picture? Reporters interviewed Xie Mulan and He Yanguang on March 18th, and they told reporters about the touching details behind the warm screen.

March 17th, the National People's Congress from Jiangxi province Semulan unforgettable day. At 3:42 p.m., 20 seconds, she received the autograph of President Hu Jintao. The chairman of the powerful signature, let her excited tears. The signature of the president and the site preparation of water pens are written on the agenda of the conference.

"President Hu is so amiable and approachable that he can readily promise my request, sign me immediately, and arrange the staff to send it back to me immediately."." At 10:30 am on March 18th, Semulan's heart, which was signed by the president with his chest on his chest, was still hard to calm. He walked out of the Great Hall of the people and talked excitedly with the delegates around him. At this point, she recalled to reporters the process of happiness. From March 17th, the closing ceremony and one day, for the realization of the villagers will entrust her gratitude to President Hu and Premier Wen's wishes, Semulan at 3:36 in the afternoon of 7 seconds, by counting the votes Congress scrutineers were to take a break on the occasion, got up and took the conference schedule and pen toward President Hu to go by staff discouraged.

Thanks to the conversation between Chairman Hu and Premier Wen, he continued his efforts. 3:40 02 seconds, in the eyes of the state councilor, Minister of national defense Liang Guanglie warmly greet Semulan, and let staff take Xie Mulan to see the president. The exciting moment has finally arrived. 3:40 12 seconds, Semulan came to President Hu's side. She squatted down, softly said: "the president, I am from Jiangxi on behalf of the farmers home, big change, folks let me thank you, is the party and the government's policy to let rural changed......" When she finished expressing her wish to see the chairman's autograph, President Hu readily agreed. When she returned to his seat at the same time, President Hu delivered with a thick pen on the agenda of the conference table on Xie Mulan neat wrote his name, then let the staff quickly returned to Semulan.

At 3:42 p.m., 20 seconds, Xie, anxiously waiting on his desk, got the heavy signature of the chairman. She shed tears of excitement as she displayed to the delegates around her. At the end of the meeting, she did not know how to collect the special signature when she packed her belongings. Think for a long time, she decided to hide himself in the heart in the signature. When she returned to her quarters, she showed them to the delegation, and many of them showed their envious eyes. In the afternoon, she immediately dialed the son of the son who was far from the village in Yugan county. Then, the good news spread throughout the village, and spread throughout the town. That this exciting news, Ruihong town party secretary said excitedly: "Mulan ah, after your meeting will come back early, let people see the town president's signature, early to the town folks report the good news." 17 evening, Semulan excited all night, the chairman's signature is seen laughing, laughing, excited.

In March 18th, Semulan, who attended the closing ceremony, said with emotion, "the wishes of the villagers have finally come true. I am looking forward to returning to my hometown as soon as possible so that everyone can see the chairman's autograph."."

Reporter: How did you think of signing your name to President Hu?

Xie Mulan: I'm from the countryside. I was elected the National People's Congress for the first time and sat on the rostrum, so close to the president. When I sit on the rostrum of the message back to the Poyang Lake Village, the villagers are adorable idea, in recent years, the national agriculture is very large, the new rural construction achievements, new life all had a thriving, then I will want to entrust the villagers. Love to President Hu and Premier wen. At the same time, I have always had a wish that President Hu will sign for me.

Reporter: How did you get to the front?

Reporter: How did you deal with Hu?